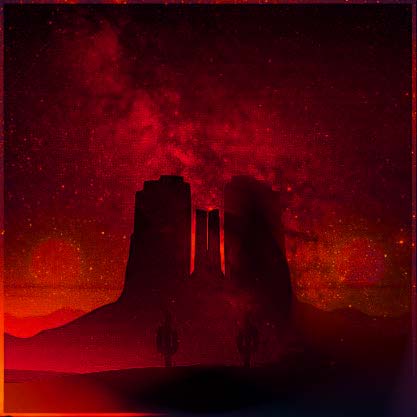 I haven’t had the pleasure of reading Blood Meridian yet, but every single Blood Meridian quote I’ve mined from the internet is extraordinary. To wit:

They rode on and the sun in the east flushed pale streaks of light and then a deeper run of color like blood seeping up in sudden reaches flaring planewise and where the earth drained up into the sky at the edge of creation the top of the sun rose out of nothing like the head of a great red phallus until it cleared the unseen rim and sat squat and pulsing and malevolent behind them.

They crossed before the sun and vanished one by one and reappeared again and they were black in the sun and they rode out of that vanished sea like burnt phantoms with the legs of the animals kicking up the spume that was not real and they were lost in the sun and lost in the lake and they shimmered and slurred together and separated again and they were augmented by planes in lurid avatars and began to coalesce and there began to appear above them in the dawn-broached sky a hellish likeness of their ranks riding huge and inverted and the horses’ legs incredibly elongate trampling down the high thin cirrus and the howling antiwarriors pendant from their mounts immense and chimeric and the high wild cries carrying that flat and barren pan like the cries of souls broke through some misweave in the weft of things into the world below.

The jagged mountains were pure blue in the dawn and everywhere birds twittered and the sun when it rose caught the moon in the west so that they lay opposed to each other across the earth, the sun whitehot and the moon a pale replica, as if they were the ends of a common bore beyond whose terminals burned worlds past all reckoning.

The wrath of God lies sleeping. It was hid a million years before men were and only men have the power to wake it. Hell aint half full. Hear me. Ye carry war of a madman’s making onto a foreign land. Ye’ll wake more than the dogs.

You can find meanness in the least of creatures, but when God made man the devil was at his elbow. A creature that can do anything. Make a machine. And a machine to make the machine. And evil that can run itself a thousand years, no need to tend it.