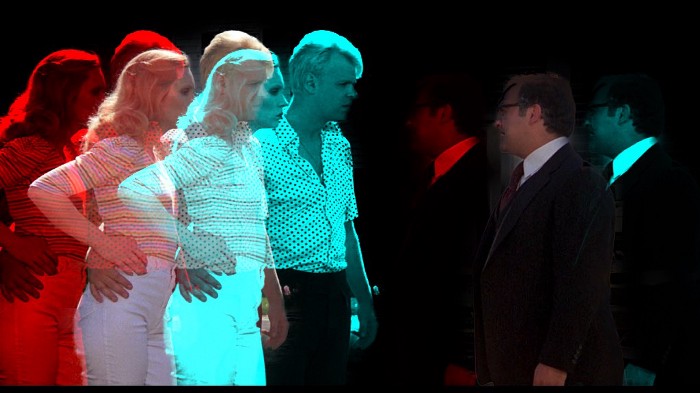 ‘Neighbors,’ a 1981 film starring John Belushi and Dan Aykroyd, has been lost to cinematic obscurity, which is sad because the movie is a masterpiece that ruthlessly deploys discomfort and tension as comedic tools.

Recently I watched it again and came away impressed with how the movie has aged. It may be funnier than I remember.

Warning: one can never really get in tune with the rhythm of the characters, and this may have a destabilizing effect on the viewer.

‘Neighbors’ is set in a dead-end suburban cul-de-sac between a giant transmission tower and sludge-filled swamp, in the freak-liminal timespace of a single evening. (Is it 7 p.m.? Midnight? Or maybe 3 a.m.? Does time even exist in this film?)

We eventually see sunlight near the conclusion of the movie, which contributes to a nice anticlimax.

Belushi (Earl Keese) and his wife Enid (played by Kathryn Walker) are in a loveless marriage — a prison where burnt waffles triumph over capon. TV news and dispiriting commercials drone on as quiet backdrops to the couple’s devout apathy and listlessness. Director John G. Alvidson of ‘Rocky’ fame depicts their suburban world as Purgatory. An atemporal cage of nowhere that is neither city nor country.

But the surprise arrival of new neighbors (Aykroyd’s character Vic and girlfriend Ramona, played by Kathy Moriarty) spells disruption for the dull misery of the cul-de-sac.

In a genius twist, the film casts Belushi as the straight guy — the normie, the square, the killjoy. Aykroyd excels as his polar opposite — an unpredictable hurricane of trickery and bullshit who loves cruel, inappropriate jokes. Everything about Vic is perverse and transgressive. Yet, hilariously, every character in the movie (except Earl) is drawn to his charisma. And even Earl eventually succumbs.

Notably: The film has a dark backstory, which the website Screencrush describes here in gossipy fashion. The same Screencrush article does an OK job of capturing the onscreen dynamic between Vic and Earl (emphases added):

At one point, Vic accepts $32 from Earl that is supposed to be used for take-out food, but, instead, Vic pockets the money and cooks the meal himself. Okay, that’s certainly a weird thing to do. But, the escalation of tension over this — shots are fired at one point and both characters nearly drown in quicksand — seems excessive. And then, without explanation, the characters become friends. Then they’re enemies again. Then they become friends again. Out of nowhere, Ramona performs oral sex on Earl while Vic plays with a remote control airplane outside of the bedroom window.

The film’s pathologies violate the rules of linear comic storytelling. Apparently, critics and fans loathed the movie in 1981, and modern audiences would probably reject it too, if only given the chance.

‘Neighbors’ introduced me to the music of the Dead Kennedys, as “Holiday in Cambodia” makes its way onto the soundtrack, maybe due to Belushi’s recommendation. A perfect fit. And the dialogue is filled with great Aykroyd-isms, e.g., there are references to an “escaped vivisectionist” plus some funny and gratuitous alliteration, a hallmark of Dan banter.

The pace of the humor — the disjointedness of it all, the lack of closure in every single scene — has an element of sadism, which can be taxing to some, and understandably so. ‘Neighbors’ is an abyss stacked with marital dysfunction and infidelity. Annihilation machines. The life of the Keese family could be rendered, not by Edward Hopper but by Hopper’s mediocre doppelganger who frequents a phantom spaghetti and wine dealership near Valley Field Mall off Route 3.

One critical note: I’d say the film’s characterization of suburbia as a pit of soul-killing desolation is unfair. This unfairness ultimately doesn’t matter, though, because the ambiance of the desolation pit becomes a character in its own right. And this “character” is such an effective antagonist that you’re drawn to its weird sentience, even if the film wants you to be repelled by it. Or perhaps this is my own weird nostalgia for ’80s suburban life surfacing.

The film ends with Earl setting his home ablaze and joining Vic and Ramona on a road trip. Earl is emancipated and ready to squeeze the maximum yield from life. This may be an unsatisfying conclusion, and possibly inconsistent with Earl’s character, but it also seems appropriate for ‘Neighbors’ to end in confusion.

Moreover, we’re left to consider whether the film’s purpose was to slowly reveal the feral beast inside Earl. His true nature.